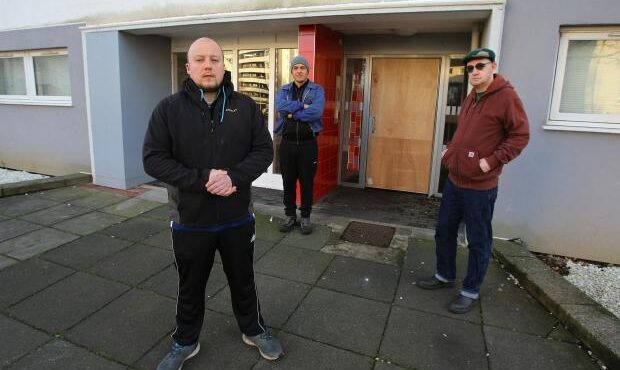 Nick Durie is a neighbourhood organiser with LivingRent.org – Scotland’s tenants’ union which represents members in both the private and social rented sectors. In this podcast, Nick talks about the LivingRent 2020/2021 manifesto, rent rises, the impacts of privatisation and environmental priorities for new builds. (Image credit: Glasgow Times.)

Welcome to the FixMyBlock podcast.

FixMyBlock.org is a project from Tower Blocks UK, created in collaboration with mySociety, funded by the Legal Education Foundation.

The FixMyBlock podcast series captures the stories of tower block residents and community organisers around the UK.

Welcome to the FixMyBlock podcast. Today we’ve got Nick joining us. He is part of an organisation called LivingRent.org, so welcome Nick and thank you for joining us. I wonder if you could just tell us a little bit first about LivingRent and your role and the types of things that you do?

So I’m a neighbourhood organiser with LivingRent, which means I’m on staff. We’re a member-led community based union. We’re affiliated with Acorn International and we’ve been in existence for five or six years now in Scotland. So we’ve focused, at least in the beginning, on private tenants and latterly with the drive to neighbourhood branches, increasingly, tenants and schemes, mostly tenants, but we have a grander vision of a community based union.

How many branches do you have at the moment? This is Scotland-wide, is it?

Yes, it’s a Scotland-wide organisation. So we have 14 branches, either in the state of being constituted or are about to be launched, and we have a number of other groups around the country. But we have our greatest density in Glasgow and Edinburgh, for historic reasons, we were founded in Edinburgh and grew in Glasgow.

When people make contact with your organisation, what do you hear about as being the biggest issues that people come to you with?

It does vary, because obviously, with private tenants, a landlord might only have one property in a street or in a whole district, or they may have several, but their concerns are often individual to them. In the round, obviously, private tenants, they’re suffering similar problems, but it’s not necessarily going up against one institution. Whereas in housing schemes, when someone has a problem, typically everyone has the problem or a lot of people have that problem. We find with individual housing associations, you can find one housing association have a bad set of practices or historic investment decisions that have led to problems. What we get a lot of, particularly in winter, is heating concerns. We have, not across the country, but certainly some social landlords have box-ticked their way through self regulation and energy efficiency standards. That’s also extremely true in the private sector. But the other bad practices in the private sector can sometimes drown that out. The big concern on the energy efficiency front is that pre 1919 tenements are exempt from all energy efficiency regulation. You have homes that were basically built for burning coal with very high ceilings, draughty sash windows, no investment, often no central heating. Those tenants can be spending huge amounts of money on energy and equally in the social sector you get this – Edinburgh’s particularly bad, the City Council there have lots of blocks that aren’t even overclad, no working heaters or when they are working, it’s storage heaters. In the UK, gas is subsidised and electricity is used to subsidise investment in renewables, so electricity is very expensive.  Heating is a problem, 2000 people a year die of the cold in Scotland, so it’s a big concern. Obviously, there are other concerns, to do with bad practices of landlords, but that that can be quite particular.

So when do people do come to you, how do you tackle these issues? How do you support communities to take collective action?

In terms of member defence, each of our branches have member defence teams, and their job is to collectivise problems and try and get resolution, both for individuals who we want to be, not just coming to us as if we were a charity, but involved in their own defence. Also to generate a legacy of learning in a scheme situation where, somebody comes with with a problem, it’s likely that other people have the same problem, and we want to fix it for everyone by getting a verdict for that particular person. So we’ll use all manner of tactics; direct action, letter writing, but we are a member-led, direct-action union, that’s our main methodology. So, we’ll do things like occupations and sit-ins, noise demonstrations, we’ll explore all variety of tactics.

When the landlord just isn’t listening, do you find that there are occasions where you’re just not getting through? And you sort of progress your way through different tactics? Or do you go in with quite a hard strategy from the outset?

I think it does depend on the situation. With private landlords, very often, what we have to do is target the letting agency and, our union is basically responsible for ending the legal fees. That involved targeting letting agencies until they gave in and negotiated. Whereas, there are some individual problems, long-standing with tenants. So it’s a case of a dialogue first and then escalate and see if we can get into a negotiation. I mentioned heating. But let’s take for example, Wyndford Tenants Union, taking on SSE over changes to both the meters in the scheme that metered the use of the heating, and also the tariff structure. So what the Union did first there was to go to the headquarters of SSE and have a noise demonstration, basically just battering pots and pans, and creating a public relations disaster for SSE, with the demand that they negotiate, which they did. So, yeah, a variety of tactics. And we’ve recently (happens every year) but we’ve recently been engaged in a campaign against the housing association The Wheatley Group’s imposition of above-inflation rent rises. Obviously, we wanted to personalise on the Chief Executive, because he was earning £295,000 a year plus £50,000 pension contributions at a time when his tenants are really up against and service charges that came out of tenants rent not being honoured all throughout the pandemic, and very poor communication. So we covered Glasgow, and in fact, much of central Scotland in A1 posters of his image, explaining that it’s time to put tenants first! He resigned just in the past few days. So I think we fight to win.

I saw on your website that LivingRent have created a Tenants Manifesto for 2020/2021. I wondered what what are the priorities in that manifesto and how have they been impacted by the COVID pandemic?

Okay, so some are long-standing. We’ve had, since the advent of the Scottish Parliament, mass demolition of public housing, really, until 2007. Or, if you want to say, until the the capitalist crisis of 2008. The country demolished 66,000 public homes, they’ve not been rebuilt largely. The Scottish government has this affordable housing strategy, and its affordable housing supply grants. But ‘affordable’ covers mid-market rent, it covers owner-occupied housing, shared equity housing, you know, there’s a lot of stuff in there that is not straightforward public housing that’s being funded by the government. So when you add it up in the round, the government would say we built 50,000 public homes since they started that programme in 2011. But add in the demolitions and so on, you’re probably only talking about 20,000 extra. So we’ve demolished 66,000 homes, and we haven’t rebuilt them. Communities, across working-class, central Scotland largely, have been blighted by massive gap sites, some of which have whole forests growing on them now. We know that’s associated with all manner of, not just inequality, but all manner of psychosocial damage to people. So that was a big priority for us. And in terms of environmental justice, a priority too, because what we’re seeing on gap sites owned by public authorities, is that those have been sold off for private housing.  So you know, we’re making a point that we need restorative justice for vacant land. This land is vacant, because of the largely unnecessary demolition of public housing and what’s being built to replace it is owner-occupied, poor quality, low life-expectancy, in terms of homes, that is, you know, gas combi-boiler, two car driveway – a real lack of imagination, or foresight type developments. Also this coincides with a number of our branches that have gap sites next to them. So we wanted to make an impact on that. A longer term thing, like the government’s public housing strategy. Then there’s other things that we want to achieve. So we’ve been campaigning for a long time for rent controls. We forced the government to bring in rent pressure zones, but they haven’t worked, in fact, nowhere have they even been tried. So we prefer a model of a points-based rent control system and we can also see there’s some validity to that in the social sector where you have some landlords who are willing to let out just absolutely terrible accommodation, and because it’s a highly regarded area, like for example, Partick in Glasgow, the rents for the social homes are still very high. So that’s a concern of ours.

The other thing is, Scotland has around half a million homes that were acquired under Right To Buy. So if you add up all the social housing tenants, there’s something like 600,000 socially rented homes, but there’s about half a million homes that are in schemes that are bought. Increasingly, what’s happening is that these homes are being bought speculatively by institutional investors for cash, often under their value, but for cash, in order to be let as HMO’s, really changing the character of communities. We know that housing associations and councils are very keen to buy these properties back because it’s often more cost effective for them and better for their management to buy those back rather than build new homes. So the trouble is, they’re not cash buyers. So we wanted an opportunity for social landlords to get a first right of refusal if any of those homes are resold. And lastly, one of things we’re very concerned about is rent consultations in the social sector. These were envisaged as a form of control and power for the tenants in the 2001 Housing Act, but it hasn’t really worked out that way at all. Very often the consultations, which are mandated by government – there must be a consultation, are run by a PR consultancy. What we’ve seen is, over the past 20 years, but particularly the last 10 years, massive above-inflation, rent rises in the social sector annually. That has really deleterious effects on, particularly family sized homes, because if your rent was higher because of your number of bedrooms and you’ve got an exponential growth in the rent, then your home becomes more unaffordable vis-a-vis all the other homes in the scheme. So that’s having huge impacts, so we wanted to see that challenged as well.

Well, thank you for all the work that you’re doing in the housing movement, and thank you for speaking to us today. If you want to find out more, please visit their website at LivingRent.org

You’ve been listening to the FixMyBlock podcast. Visit the website at FixMyBlock.org

Use the hashtag FixMyBlock on social media and join the conversation.